Eat, Sleep and Drink in Liverpool

By marine Menu No Comments
EAT (like you mean it)

Once awake, one of my favorite thing on a Saturday morning (and by morning I mean from 11:30 AM) is to head towards the Cathedral Café (called Mezzanine Café) for a full English breakfast. Especially on a sunny day, the walk from the city center up Bold street, pass the Bombed out church, all the way to the Philharmonic Hall is simply my favorite. It’s a bit of a detour from town, yet you’ll get to see the beautiful Georgian buildings, which haven’t been destroyed and replaced by concrete cocks in the 70s. If you’re brave (or simply want to get rid of that terrible hangover with a little exercise), from hope street head towards Falkner square, Catherine street has some of the nicest buildings in town. The good thing is, you can’t get lost because from every single place in Liverpool you can see the huge, massive enormous cathedral.

An alternative to the Mezzanine café (or if you’re really too hangover to sit in a Cathedral), stop at Quarter, right on Falkner street (that’s also next to the Philharmonic Hall). Their full English Breakfast is amongst my favorites. It’s a great place for a brunch or lunch. 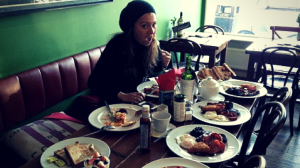 I woke up and I was just really hungry

Once you’re done with Food, take the time to visit the Cathedral. It’s totally worth it (and it’s free). Liverpool’s Cathedral is gigantic. It took 74 years to complete. On a sunny day you can also reach the top of the tower and enjoy the most panoramic views on the Mersey River.

If places of worship’s not your thing, head to the Baltic Triangle, the epicentre of Liverpool’s creative community. Artist studios, creative agencies, funky little digital start-ups, Baltic Triangle is probably the better looking baby sister of Shoreditch in London. Younger, hotter and with some dignity. Unit 51 is a great place for food, so is Baltic Social.

It will only take you 10 min to head to the Albert Docks from Baltic Triangle. And if you miss the Albert Docks, it’s like you’ve never been to Liverpool. Pay a visit to the Liver birds, take the time to see the Slavery Museum. 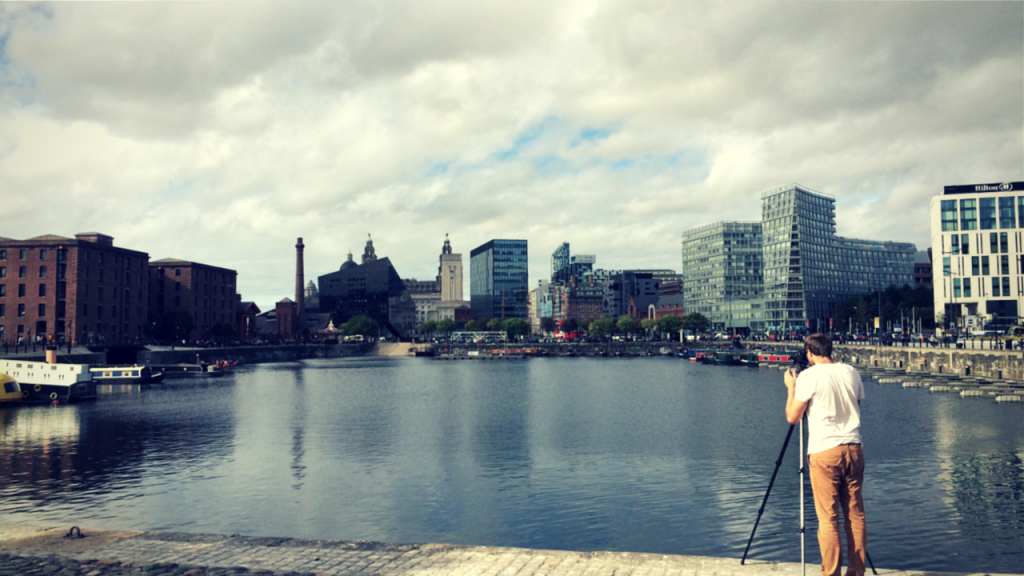 Dinner: One of my favorite place is the hub, a great gastro-pub, book ahead as it gets very busy very early.

A great cheap option is Kimos , a favorite amongst students, meal portions are huge and it’s absolutely delicious. A great mix of all time favorites mezze and the more classic student food options. It’s Halal and the staff is super friendly.

For a 3AM kebab or pizza, there are plenty of options in town. The good thing is, you’ll get a pizza with a view. 3AM in Liverpool on a Saturday is quite a show!

Let’s face it. You’re not in Liverpool for the gastronomy…

Sleep (and you'll need it)

There are several options, from 5* to no stars at all. Liverpool has something for every budget. My recommendations are:

Cocoon: If you don’t mind sleeping in the basement with no windows. It’s cheap, reasonably clean and 10 min from Concert Square. You won’t need to cab it, unless you’re totally S***faced. Weekend rate: 55£/night for 2.

Novotel: super central, you can find some great deals directly on the Novotel page and if you subscribe to Le Club Accor you’ll be the first to know about it. Room starts at 70£/night for 2.

Hope Street Hotel: Expensive. Boutique hotel close to the Philharmonic Hall, rooms are small yet it’s a nice place (avoid if you’re planning a mega night out with your mates). It’s a bit run down but if you want to avoid the big chains (Hilton or Crown Plaza) it’s about the only decent 4 star options around. Room starts at 150£/night for 2

From the airport, either take a black cab (around 20£ to the city center) or take the airport express (5£). 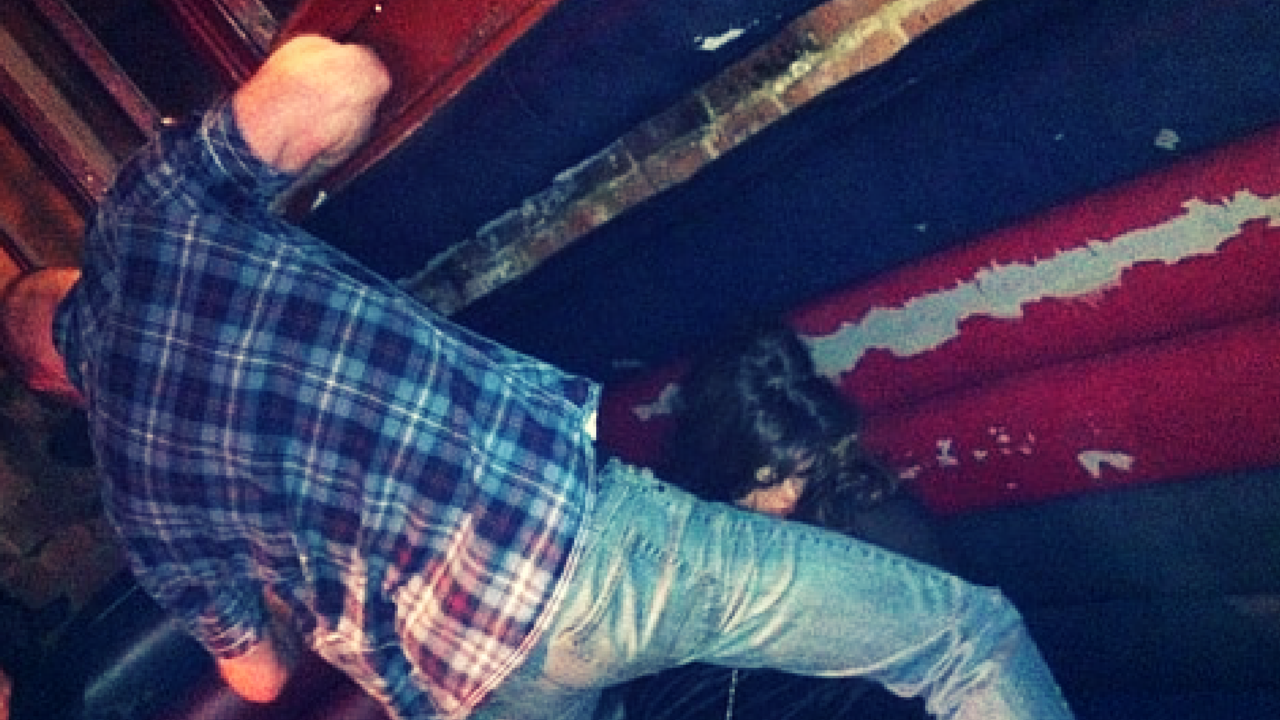 The City Center is tiny. Hence you can walk every distance for a great bar hoping night out. If you picked the wrong pair of shoes, cabs are cheap and widely available.

For an easy night out:

Start with a drink at Studio 2 Parr street. It used to be a fab recording studio back in the 80’s. Coldplay recorded their parachutes album in Parr street (amongst other). The bar is located on Parr Street (surprise, surprise…)

When you’re done, head towards Santa Chupitos (it’s right at the end of Parr street, about 30 seconds from Studio 2) for a cocktail. It’s loud, cramped and fairly young.

On your left when you leave Santa Chupitos, you’ll have plenty of bars on Slater street. The Shipping forecast is a great place to have a dance, sometimes there’s a gig in the basement. A hipster crowd (as much as scousers can be hipsters) with decent music.

For a wilder night out:

Be ready to queue. While most bars will accept mixed group, it’s important as usual to be super friendly with the bouncers. And honestly in Liverpool they are some kind of unsung heroes. They deal with the worst and yet always manage to say “alrice luv” with a smile when you finally get in the bar.

You can start your night at circus at the Docks. This place is posh, loud and once in a while you can spot a famous footballer (if that’s what you’re after…). I’ve never been a fan of the Docks, all the bars pretty much look the same and to me they’re not really what a good night in Liverpool is about.

Then head to Matthew street. To be honest none of the bars are amazing on Matthew Street, it’s just that while in Liverpool, it’d be silly not to go to the legendary Cavern Club (or at least see Matthew street on a Saturday night). It’s loud, cheap and dirty but a lot of fun. You’ll meet middle aged women dressed as playboy bunnies, teenagers (with their mums dressed exactly the same) and everything in between. Big and bouncy hair, crazy short skirts and lots of fake eyelashes with an orange tan: Liverpool is a fashion kind of place.

The cavern club is nothing special, yet, a must if you’re a Beatles fan. The original cavern club is actually on the other side of the street, but hey. It’s loud and fun.

Don’t miss out the wall of fame, with all the number ones from Liverpool bands (yes, there is more than the Beatles)

From Matthew street, make your way back to Concert square, in the heart of the action!

Don’t miss! Alma de Cuba, cocktails are average yet very expensive but to be honest you can’t beat the décor!

Fancy a dance? Head to Heebie Jeebies. the crowd is super young but it’s massive fun!

Mojo : The rock bar (or?) great for cocktails and dancing to Queen of the Stone Age

Once you’re in the area you can pretty much go into any bar. Music is LOUD so you know what the bar is about when you’re at the door.

Safety tip: People tend to get pretty wasted in Liverpool, don’t jump the queue or jump on a cab when people have been queuing. This being said, people are generally super friendly in Liverpool.